Training sessions are the best way to improve the level and fitness of your players and to create a team that co-operates better. You can design training sessions in many different ways. In this article, we provide four focus points for an optimal result.

1. Always focus on improving the playing style of the team

‘The objective of a training session is nothing else than convincing the players of the playing style the coaches believe in.’

The statement above summarizes the essence of training sessions very well. Of course, there are many ways of improving players in executing the style of play, like team talks, individual meetings and showing footage from matches.

But training sessions will always be the best way to do so, because the players actually experience the situations you put them in.

Do you want the players to use man marking? Do you promote switching play? Do you ask your players to play cut-back crosses when possible? Or do you want your defenders to drop when the opposition can play a through ball? Then you should always make sure the players practice these things in the drills you use.

2. The learning effect is always bigger in game realistic drills

‘Training is the continuous improvement of the link between perception and action.’

Every football action starts with collecting information, continues with making a decision and ends with executing that decision. If you want players to get better at football actions, it is very important to implement all those three steps in training drills.

You do not only want players to improve at the execution part (such as giving an accurate cross) but also in making the right decisions (such as recognizing the ideal moment for a cross) based on collecting information (such as scanning the position of the attackers, defenders and goalkeeper in the box).

In an isolated football drill, where the coach tells the players in which sequence and direction they have to pass or dribble, the attention is only focused on the execution. That is a missed opportunity, because players also have a lot to learn in collecting information about their surroundings and making the right decisions.

3. Players improve faster by making a lot of repetitions

‘The secret of a good drill is hidden in isolating the football behaviour you want to see.’

A tactical 11v11 game is very game realistic, but also has one very big disadvantage: the specific aspects you focus on won’t occur very frequently. Players do not make a lot of football actions in direct relation to the focus points.

To improve players in man marking, switching play, cut-back crosses or dropping back, it is important to have a lot of repetitions in those specific aspects of the game.

While using smaller pitches and less players, situations occur more often. It is the job of the coach to create drills that are still game realistic. By doing so, the players are continuously challenged to come up with solutions for different situations and perform a lot of football actions. 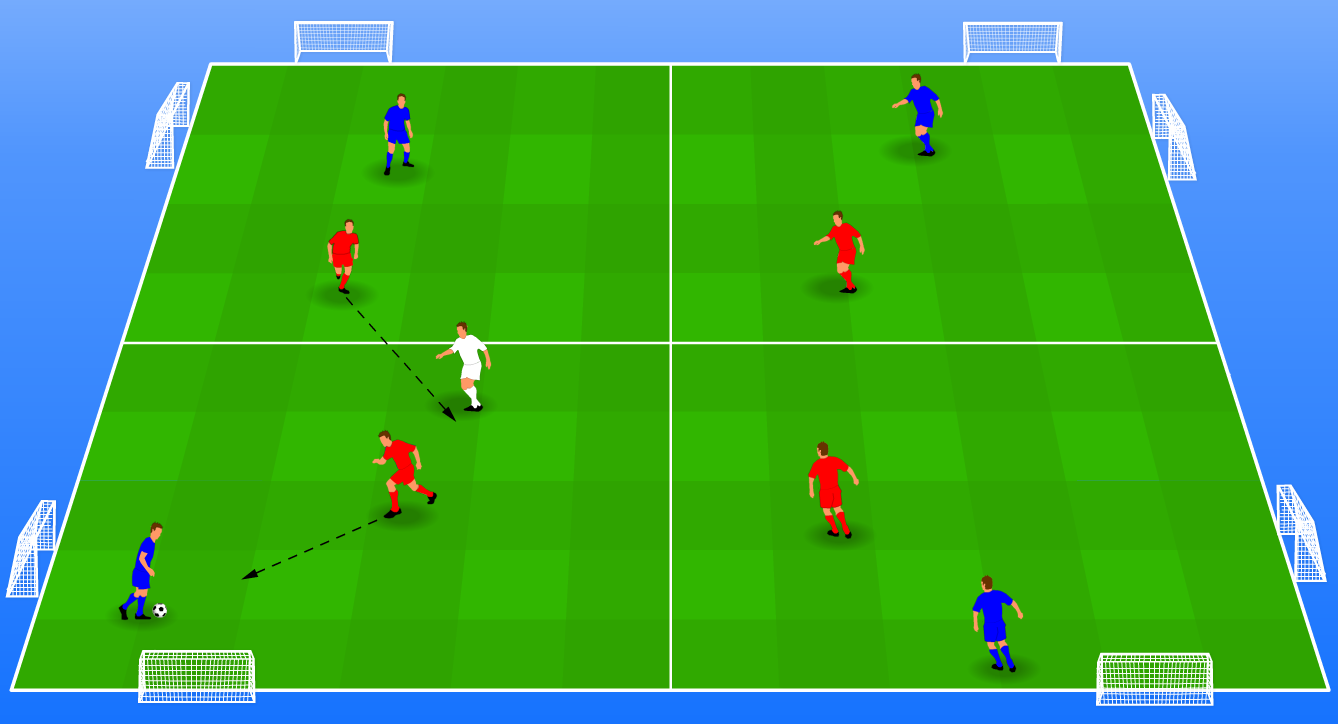 4. A lot of variation ensures players who think faster and adapt better

‘A human being is a natural adjuster.’

More and more coaches use training drills with continuously changing rules, methodological steps, varying resistance and different ball types and surfaces. By doing so, players can’t play football on the automatic pilot. Time after time, they have to be very focused and adapt to different circumstances.

The thought behind this is that every match situation differs too. By putting a lot of variation in training sessions, the cognitive ability of the players improves. They learn to solve problems they face in the game faster. As a result, they improve their speed of action.